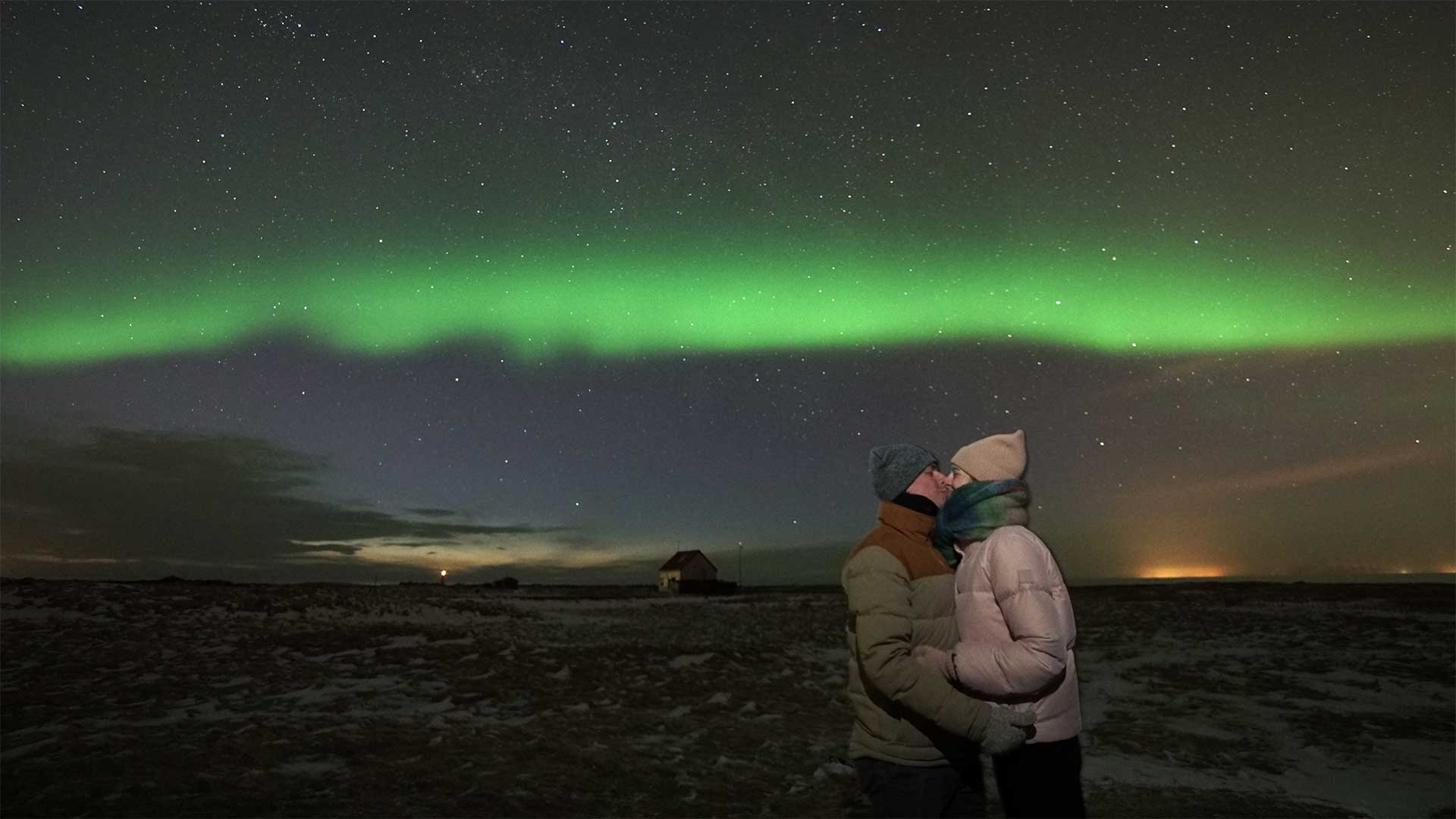 Tonight and tomorrow the cloud forecast is in our favour! It’s not often we get completely clear skies here in Iceland, but that’s what the forecast is saying for parts of the country now. Don’t jump too high for joy though, it can turn out more cloudy than expected (like last night), so keep a close eye on that satellite image you can find on our front page.

Geomagnetic activity is mostly forecast at Kp-2 which is good (dropping to Kp-1 for brief periods), even though the Kp scale is 0-9, as rarely does the forecast go over 3, very rarely over 5 and almost never does it go to 8 or 9.

Moonlight may pose a problem as the Moon is up and bright. If we do get some clouds, we’re going to want them blocking the Moon, and not the Northern Lights. In any case, once your eyes get used to the darkness, due to the Moonlight you will see so much of our beautiful landscape in the dark.

Northern Lights Tonight in Iceland and this Weekend 17.-20. October 2019

Below is a brief overview of the Aurora Forecast in Iceland Tonight. Bear in mind that a forecast, like weather, is a living thing, not a sneak peek into future. The forecast can, and most probably will, change from now until darkness tonight even. Make sure you check the forecast data on www.auroraforecast.is before planning your Northern Lights hunt.

Moonlight pollution. Annoyingly for Aurora hunters, moonlight is in itself a light pollutant and can wash out mild Auroras if it’s bright enough. Also, with a bright moon like this weekend, the high clouds can become a cover of white light (sucking up the moonlight) and thus blocking the Northern Lights.

Ironically, October’s full moon (13th) is commonly known as Hunter’s Moon. Whereas a Northern Lights hunter’s moon would be a No Moon 🙂

What time are the Northern Lights most likely to appear?

Lady Aurora can do her dance day or night. Basically, as long as you have darkness and a clear sky you have a fair shot at seeing some of her awesome moves. Once she stops don’t be fooled as she can re-appear just as fast as she disappears. If you are a fanatic, get an app to wake you up by alerting you when the lights start moving. We recommend Live Aurora Network. Then you can wake up to a 5am alert (for example), if that’s when Aurora decides to show up, and hopefully the display lasts long enough for you to leg it out of the house in your jammies!

Should you join a tour or go on your own?

If seeing the Northern Lights is your priority, and you are here for only a few days, we recommend you maximise your chance of a successful sighting by joining a professional Northern Lights tour. Not only will a professional guide be more likely to find a good sighting spot, but they will also tell you all the amazing science behind this natural phenomena as well as fascinating folklore stories and myths. Some will even point out other fascinating objects on the sky, planets, constellations and starsigns. And some will take your photo under the Northern Lights. There is a variety of tour options to choose from and we cover their pro’s and con’s in this blog.

If you are happy reading the weather and want to venture out on your own, always check the Safe Travel and Safe websites first as it can be tricky driving on Icelandic roads in winter.

Once on the road looking for a clear sky, your best tool is the Satellite Clouds image (click the tab above the cloud cover, on the front page). Have a friend do this or park safely off the road while you check the website. When you find a clear sky there is no need to look further, now you start waiting. The Auroras can happen as quickly as lighting. Keep your eyes peeled. With the lower Kp rating forecasts you want to make sure you don’t have anything blocking your view towards North, like a big mountain. The cloud forecast for spotting Northern Lights tonight in Iceland is great! If you are anywhere but the East, that is. The East is forecast to clear up towards the morning, but even so, if you are in the East, keep an eye on the clouds, they might clear up sooner than forecast.

If the cloud forecast comes through, we should see the expected Kp2 activity at some point during dark hours. However, the 89.8% illuminated Moon could wash out the intensity somewhat if the lights are mild. Don’t be discouraged though, you may just as well see a beautiful display. Continued cloudless sky, almost, with the South Coast least likely for success. The activity is forecast at Kp2 at 6-9pm, Kp1 at 9-midnight and Kp2 at midnight-3am. This is not exact science so don’t panic over the Kp1 you see there.

The Moon is still posing some light pollution problems for us at 82.7% illumination. Pray for a random cloud to block the Moon! And then the clouds come in. If you are in the South or East you have a chance early evening, according to the forecast as it is at the moment this is written (Thursday noon). Moon is still bright at 73.9% illumination. These are mostly just high clouds though, so if they are wispy thin, or have holes in them there is hope yet!

Too soon to tell for the cloud forecast really, but heavy precipitation is expected for most of the country on Sunday. Next week the Aurora activity might be picking up, according to long term Kp forecast, and the Moon is waning. So, fingers crossed for clear skies again next week!

REMEMBER: This is just a forecast and it can change fast in Iceland where the weather systems move quickly over our little island in the middle of the ocean. Check the forecast again before you go out, use the satellite images to see what’s really happening as well as your eyes on the skies once you start hunting 🙂

HAPPY NORTHERN LIGHTS HUNTING! Tag us in your photos on Instagram: aurora_forecast_iceland and on Facebook: Aurora Forecast Iceland.

Thank you to Happyworld Iceland for the featured photo showing us what a K-2 rated sighting can look like.